Biarritz is for me a diva, where I can discover something again in every visit. For me Biarritz was not love at first sight. I have always admired the omnipresent ocean to this day. The town (about 26,000 inhabitants out of season), which does not have the harmony of Saint Jean de Luz or Bayonne, has its beauty in the uniqueness of the different architectural styles. All villas and former or existing hotels have their own unique and noble history. Biarritz is very youthful, dynamic and not snobbish.

The tour will be adapted to your wishes. You can contact me (Steffen Heckmann) via info@baskenreisen.com and 0033-64548334.

Biarritz city tour on your own

If you want to discover Biarritz by yourself, I invite you to read my blog. A classic Biarritz visit starts at the Biarritz Lighthouse. There you have a fantastic view of the city and the rocks of the Blessed Virgin Mary. When you circle the lighthouse, you will have a spectacular view of the Silver Coast or Les Landes, a continuous beach from Anglet to Arcachon. 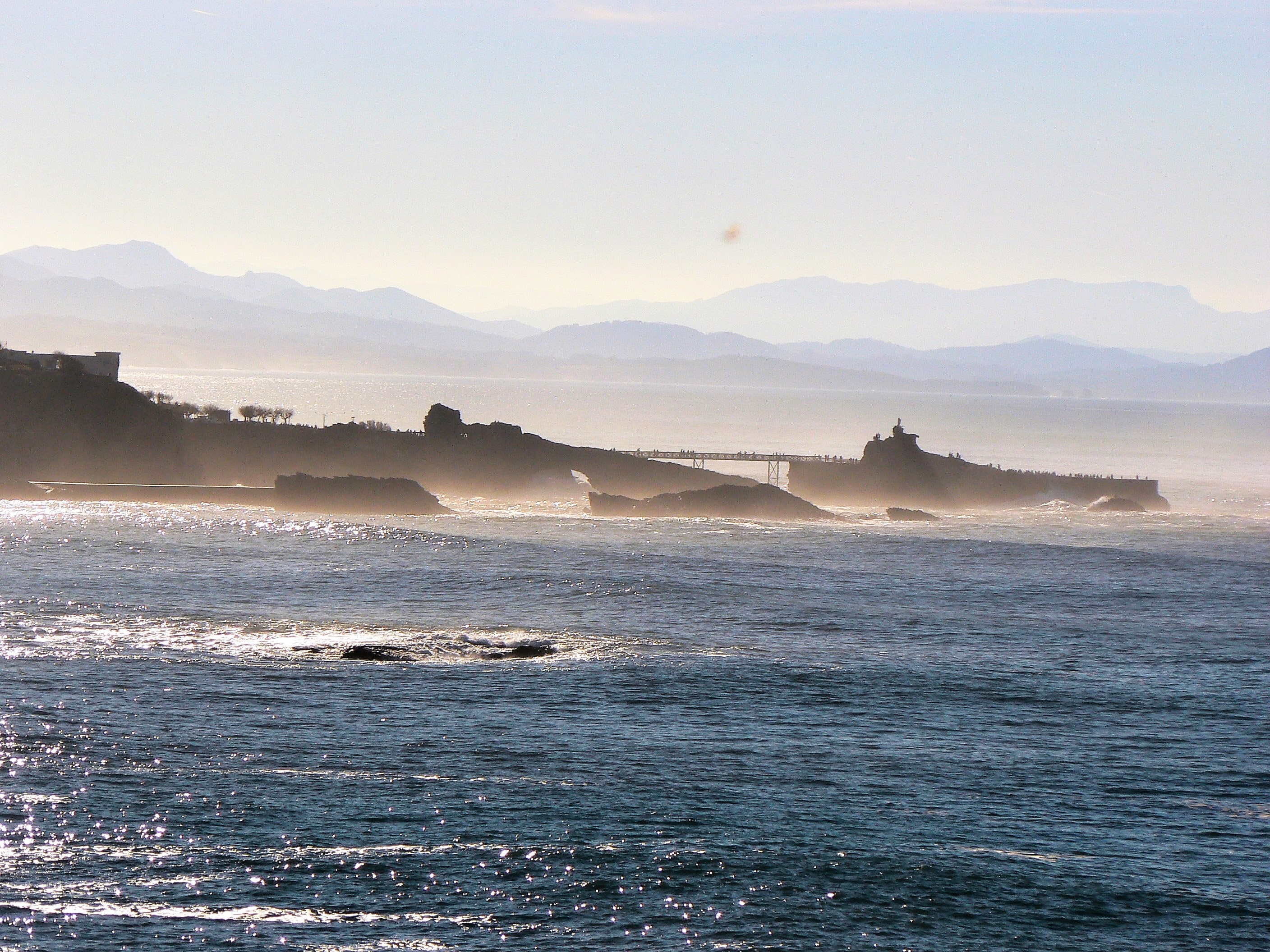 From the Grand Plage you have a great view of the "Hotel du Palais". The hotel was formerly the summer residence of Napoleon III (the son of a brother of Napoleon Bonaparte) and his wife Eugenie. In 1881 the building was sold by the former Empress Eugenie. It became a hotel, in 1901 the building was destroyed by a fire and later rebuilt. The shape of E for Eugenie was preserved. The hotel itself is much larger than the then summer residence of the imperial couple. 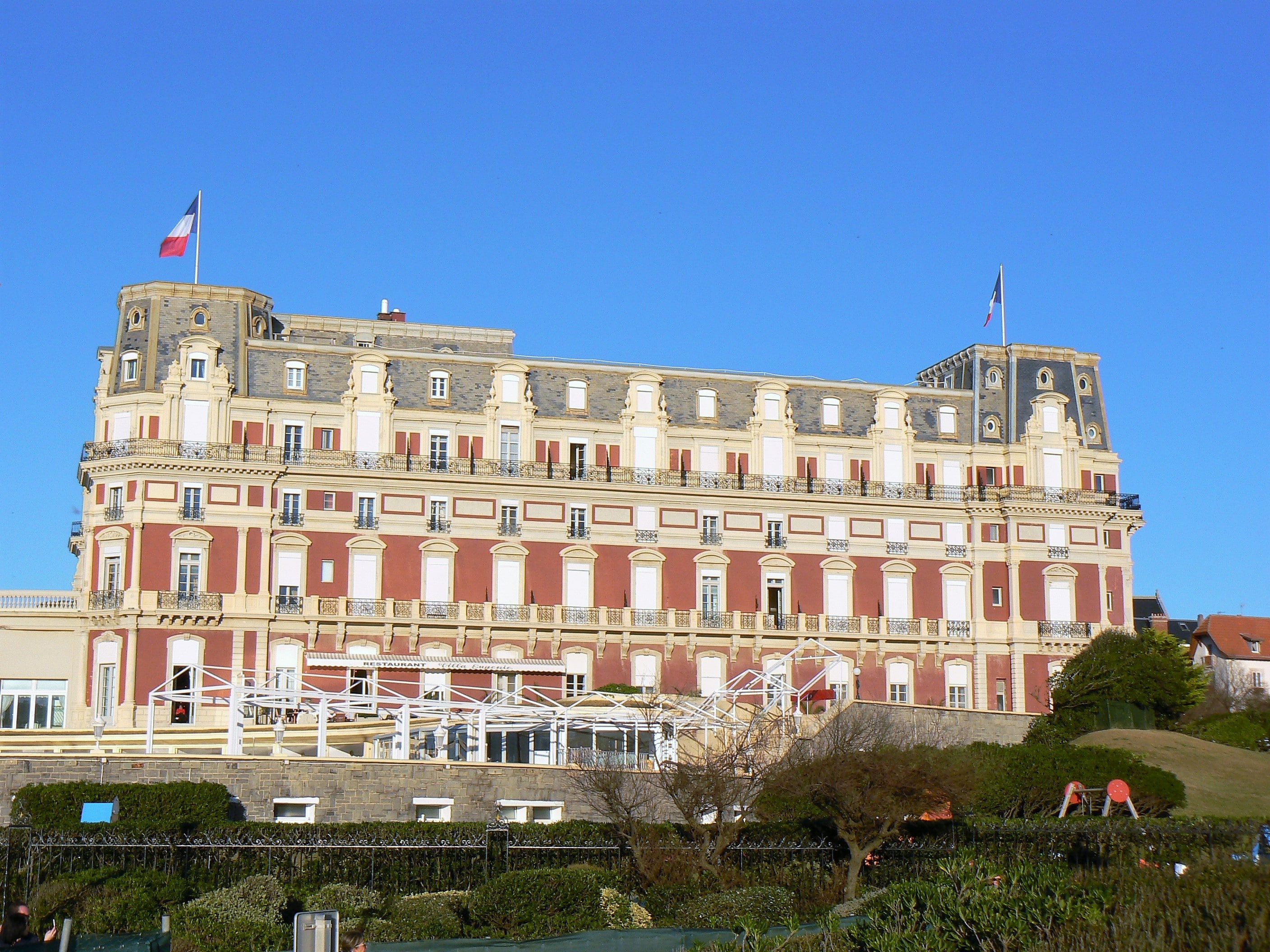 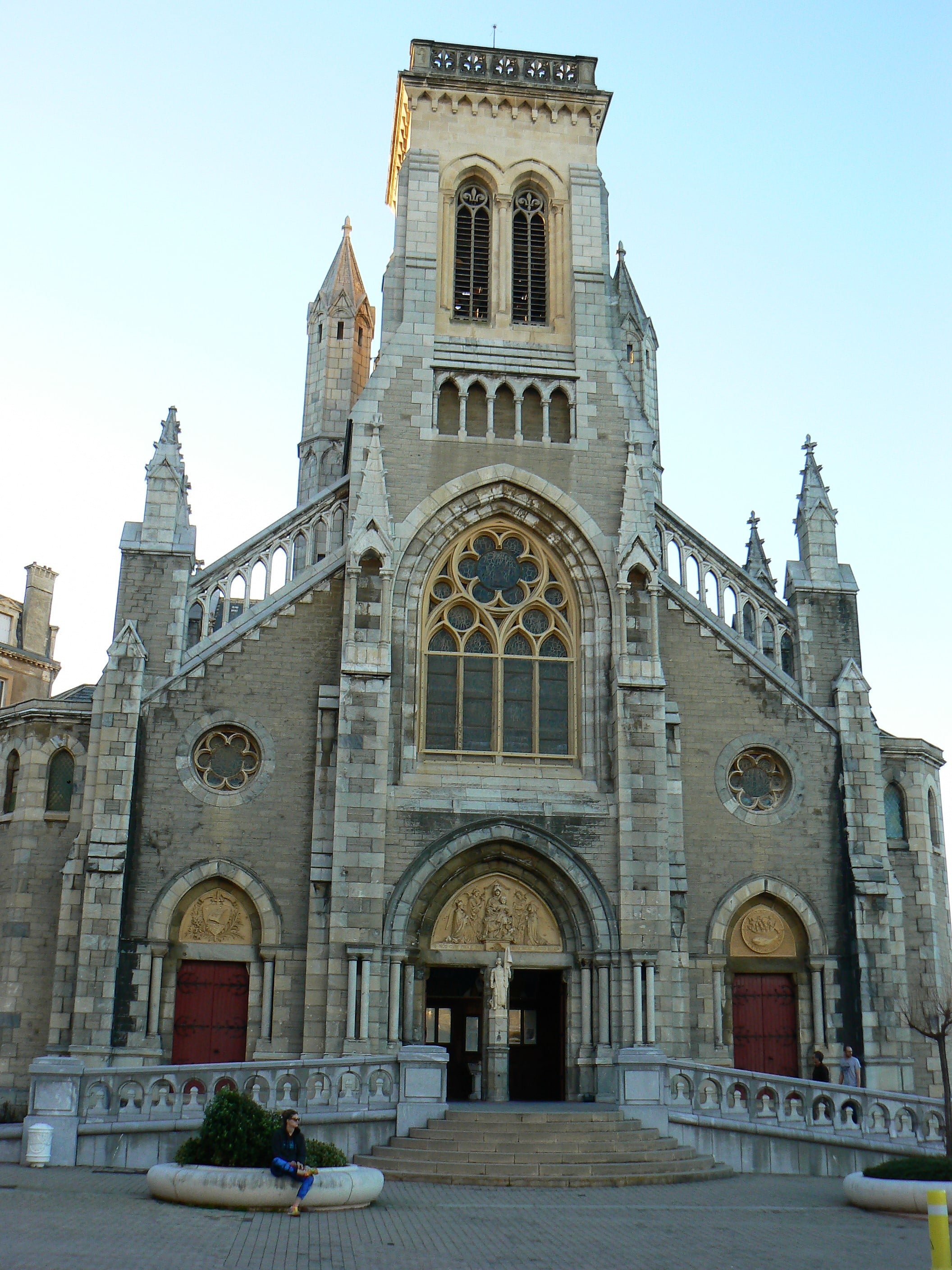 Now it is not far to the fishing port. The small fishing port is a lovely place with nice little restaurants with a very relaxed and summery ambience. Napoleon III wanted to build a larger harbor, but the storms of the Atlantic did not allow it, the walls were torn down. So today you have a small fishing port which in its best time, with up to 250 fishermen. 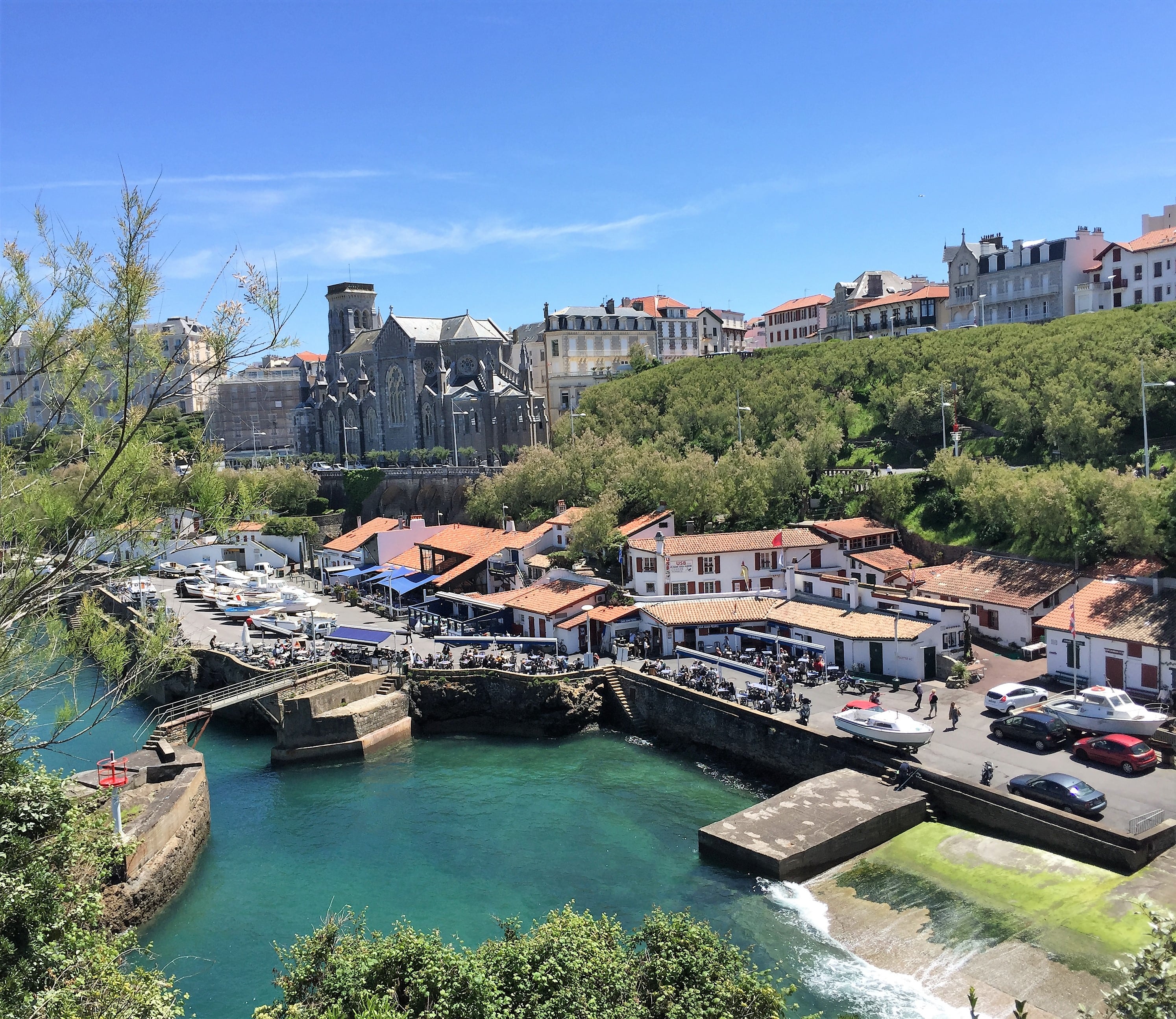 I end my city walk on the port vieux. Today a small sheltered beach, but with a fantastic history of whalers.

The Basque fishermen famous for their ability to harpoon whales. The oil of the whales used to light homes, bones and ribs to make fences, skin cut into strips to make seats or helmets. The flesh was eaten and the tongue of fish was a specialty.

The old port away from the swell of the sea, passes that guarantees access boats. A gently sloping beach allows whales to fail at high tide, waiting for low tides to disband them.

The beach did have production facilities like: ovens to melt bacon, chimneys to cook and smoke meat, tanks to conserve the oil.

16. century – whaling declines to stop in 1690. Today calm beach without waves, ideal for children and learn to swim.

Eugenie also enjoyed this beach, as she already visited Biarritz 1838 as 12 year old kid with her mother the Comtess of Montijo. Her mother was a well-known person as she was very active in charity activities for poor people in Biarritz. 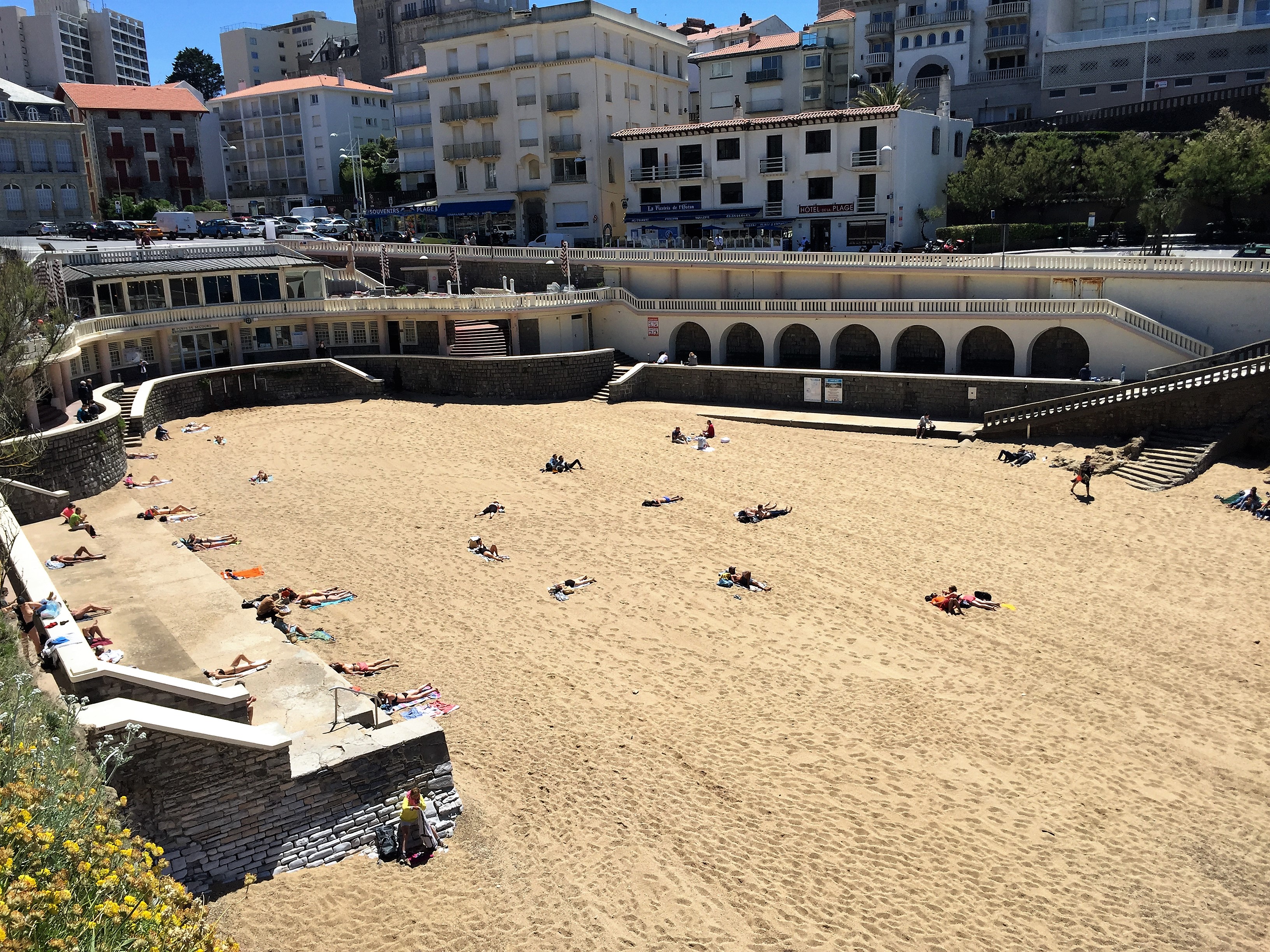 Back to the city center, I always walk on the street Rue du Port Vieux and Rue Mazagran, there are countless restaurants and then many beautiful individual shops. The final point I sit on the place Bellevue with a magnificent view of the ocean. Incidentally, the statue on the square is by Jorge Oteiza, a famous artist from San Sebastian.

1956 - When filming “The Sun also Rises”, based on Hemingway's novel, screenwriter Peter Viertel uses a surfboard bringing from California.In August 1956, Peter tries surfing first time at the Côte des Basques with the presence of Ernest Hemingway. After some tests the board crashed in the waves. In June 1957, Peter Viertel came back to Biarritz after some surf sessions in California. This time he came with 3 surf boards. He gave one of the boards to Joël de Rosnay which made very fast progress.

My friend Danny and myself at the Côte des Basques

The history of Biarritz:

1120 – 1600 The time of the whalers: Biarritz is a small village in the middle ages. Agriculture and a small port are the pillars of the economy. The fishermen are famous for their skills as harpooners. The old harbor allows fishermen to bring the whales in at high tide. At low tide, the whales can then be disassembled. Just until the middle of the 17. Century whaling is the main income of the population. Later the whale did not show off any longer at the coast. At that time the Basques already started to sail to Newfoundland from Saint Jean de Luz and Bayonne.

1700 – 1850 Swimming in the sea came up: In the 18. Century swimming in the sea started to become acknowledged to be good for the health. One of the first famous visitors was the novel writer Victor Hugo (the hunchback of Notre dame). He loved the white houses with red roofs and green shutters.

1854 – 1890 Napoléon III and the empress: After the marriage of Napoléon III and Eugenie, they spend almost each vacation in Biarritz just until 1868. The emperor built the palace “Villa Eugenie” within a year for his wife. The high nobility from all over Europe came to Biarritz. The kings of Württemberg, Belgium and Portugal, Princess from Russia, Poland and Rumania, lords from England and Spain spent in Biarritz vacation. Quite a big Russian community spends October in Biarritz before the long winter. After the Russian revolution some of them stayed to live in Biarritz. Therefore Biarritz does have also an orthodox church.

Boom town: From 1876 until 1881 300 new buildings have been constructed by the European elite. There was quite liberty to construct in the style you wanted to build. Therefore Biarritz does have various building styles like maisons basque (néo labourdin), style art deco, Villa’s with towers (Néo gothique), style Normand. Biarritz does even have a Russian Orthodox Church. As an important number of Russians passed their vacation in Biarritz. After the revolution in Russia in 1917 a lot of Russians stayed to live in Biarritz.

The nobility and the French elite discover Biarritz as a summer residence. The English prince and future King Eduard the seventh take care of the first golf course (le Phare) and a horse racecourse in Biarritz.

1920 – 1930 The crazy years: The casino of the city of Biarritz and the Casino Bellevue are opening. One celebrates pompous festivals. Luxurious parties are celebrated.

1939 – 1945 World war II: Biarritz is occupied by the Germans and becomes a military exclusion zone. The coast is fortified; one builds the so-called Atlantic wall. In 1944, the city was bombed by the Allies, which was supposed to neutralize the airport.

1947 – 1970 The glorious years: Biarritz is becoming more of a holiday resort for families. Surfing begins with the American Peter Viertel as the film the sun also rises (Novel from Ernest Hemmingway) is being filmed. Celebrities like Brigitte Bardot are still coming to Biarritz.

1980 The start of a new perspective: The business tourism spa treatments begin to become very important for Biarritz. Biarritz has large convention halls, the G7 in August as an example. Surfing becomes also an important industry and sport at the Basque coast.

Though a fervent Catholic and conservative on many other issues, she strongly advocated equality for women. She pressured the Ministry of National Education to give the first baccalaureate diploma to a woman and tried unsuccessfully to induce the Académie française to elect the writer as its first female member.

She already visited Biarritz 1838 as 12 year old kid with her mother the Comtess of Montijo. Her mother was a well-known person as she was very active in charity activities for poor people in Biarritz.

January 1853 marriage with Napoleon III.First vacation of the couple in the summer of 1854. Napoleon the III loves also the village, he was riding his horse at the beach. In October 1854 he bought 11 hectare of land right on the beach. More than 1.500 pine trees have been planted to protect for the dunes. The building for the couple was finished for their next trip in summer 1855. More than 200 workers have been contracted just to finish the new summer residence in time. Between 1855 and 1868 they spend each vacation in Biarritz with 2 exceptions. Biarritz was also a good strategic place, as the family of Eugenie and the Spanish royal family spends their vacation in San Sebastian at the Spanish Basque coast, very close to Biarritz.

The villa Eugenie did have 8 bedrooms in the first floor and a big living room in the ground floor for about 40 persons. For the people from Biarritz it was a strange place to build a villa as it was far away from the beach of port vieux. The building itself was not so luxury, it was rather humid, cold and small. But very close to the sea, when the waves have been strong the water was getting until the terrace.

The grand plage became a real beach with the imperial couple, before it was dunes in a very natural and wild area. Eugenie took on a daily base a bath in the sea. Even Bismark in 1865 visited the imperial couple. The empress Eugenie also developed a dress code a black swimming suit and a bath cap, also for her staff which worked on the imperial boat (20 oarsmen). Biarritz became a catwalk, the Russian lady Rimski-Korsakov arrived for a vacation of 20 days with 85 different dresses.

With good weather, the imperial fleet always anchored in front of the Villla Eugenie. In bad weather, the boats always had to go to the port of Saint Jean de Luz. In 1867 there was also a dramatic accident. The Empress wanted to introduce her son in Spain in Saint Sebastian. On the return trip, there was a stormy sea at the entrance to the harbor and a sailor sacrificed himself and prevented the collision with a rock.

More information in a German Video about me :

Vacation apartments in the area of Biarritz:

More information at: Apartments in the Basque Country